The district is unique to India and to travelers from all over the universe. View of Mount Kanchendzonga and Mount Everest are particularly inspiring from all the highest points particularly Darjeeling town and Sandakphu. The name Darjeeling is thought to be a derived from 'Dorjee-ling' means the land of Lightning or the land of thunderbolt. Just the opposite is the plains of Darjeeling district with Sanctuary and National parks,plain forest with diversified flora and fauna and the backdrop of the snow summit Himalayas. Singalila national park, Neora valley and the Mahananda wildlife sanctuary are some of the most inspiring wildlife center. Internationally famous for many reasons, one is tea the only major industry continues to regulate the economy of the area and the country as well secondly the hotspot of tourism known as the Queen of Hill Station thirdly the Darjeeling Himalayan Railway, fourthly the origin of the famous expedition of tensing Norgay and Sir Edmund Hillary and the list goes on.Darjeeling can be reached by the 80-km long Darjeeling Himalayan Railway popularly known as the Toy Train. A pair of train Siliguri plies daily to and fro Darjeeling;The Darjeeling Himalayan Railway was declared a World Heritage Site by UNESCO in 1999

The lone and major airport of the district is Bagdogra airport (IXB).Sikkim helipad is also close but has only chopper service. Bagdogra airport is accessible from all the tourist hot spot of Darjeeling and is within a couple of hours drive. Bagdogra airport has direct and regular flight to Kolkata, Delhi, Guwahati and Chennai. There are vehicles available outside the airport to travel to any of the tourist center.

Network of Indian railways exist in Darjeeling district but the jewel in the crown is Darjeeling Himalayan Heritage Railway.This UNESCO declared train is a delight to ride.Many a movie has been screened in this train.The ride is mesmerizing and the route is second to none. This train route initiates and terminates at New Jalpaiguri Station which is linked to the rest of India with lots of trains.

The network of roads are good and all the spots have two or more route.The reasons may be many but the main reasons are firstly approach from any tourist location and secondly diversion necessary for landslides which are frequent in monsoons. Darjeeling or Kalimpong for example can be approached from Siliguri, Pelling, Dooars and Gangtok via different routes. State government buses and buses of Sikkim and Bhutan have frequent service from Siliguri one of the main town of Darjeeling district. It is one of the hill sub division of Darjeeling and was a center for trading during prehistoric period.Straddling a great ridge overlooking the Teesta River gorges and tea estate clad hills and is situated at an elevation of nearly 1250 meters. Its gorgeous natural settings are designed for a laid back leisure holiday. Since the early 20’s this pretty township was a pivotal hub for adventure buffs, for the lure of eastern Himalaya’s potent attraction. Kalimpong is known for its old trading route known as the Historic Silk Route, surrounded by the ancient forest of fir and oak. There are places like Lolaygaon, Lava, Rishyap, Pedong, Reshi, Raliekhola etc. Traveler can catch the Kanchendzonga views and verdant vistas sweeping down to the Teesta orge drained by the river Rangeet. Thongsa Monastery is the oldest monastery built in 1692 in the Bhutanese style is worth a visit due to its historic background. The richness and variety of the botanical wealth will impress all travelers and tourist. Pretty walking trails past picturesque colonial bungalows with beautiful flower filled gardens and trees clinging to the hill side are feast to the eyes. Roche La and Jelep La pass is trek able from Kalimpong and it also offers excursion to nearby places of tourist hotspot. One can wander around the hills to discover some of the town’s little gem like the Morgan House with the army Golf Course nearby.

Airways : There is no airport at Kalimpong. The nearest major airport is Bagdogra Airport (IXB) is approximately 85 kilometers away and is served by regular by flights of Indian, Air Deccan, Spice jet and Jet Airways. There are flights from Kolkata, Guwahati, Chennai and Delhi. It is well connected to the rest of India. 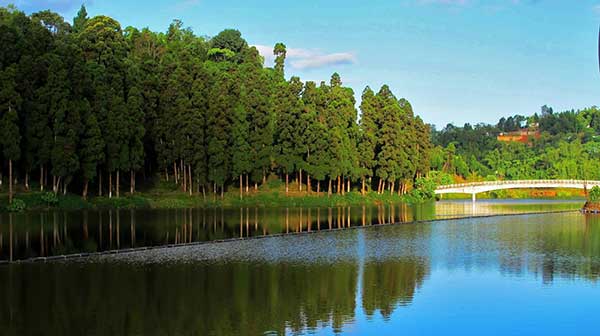 Midway between Darjeeling and Siliguri is a serene spot set about a pretty lake amidst vast tracts of cardamom and orange plantation. It has few of the finest and most beautiful tea estates of the region. The road to Mirik is scenic and green, a feast for the eyes. Mirik offers boating, gentle walk and lovely Himalayan views. It is situated at an elevation of 1495 meters / 4904 feet is a picturesque tourist spot nestled in the serene hills of the district of Darjeeling in West Bengal, India. It is one of the favorite tourist destinations due to its pleasant climate, breathtaking natural beauty and easy accessibility. Life in Mirik is slow paced yet very much alive and vibrant due to the options available here. It offers soothing effect to tired minds and is ideal for leisure holiday. Main attraction is the Sumendu Lake. It is surrounded by a beautiful garden on one side and pine trees on the other, linked together by an arching footbridge with a valley and option of pony ride. There is a long footbridge over the lake. A road encircles the lake and is ideal for pleasant walks with the magnificent view of Kanchenjunga on the far horizon. Boating on the shikaras and pony riding are enjoyable. Mirik is ideal for leisure holiday and one can even travel to Pashupati in Nepal for shopping. The amazing diversity makes this region a holiday destination for all season.

Airways : Bagdogra airport (IXB) in Siliguri is 60 kilometers away.Taxis / buses are available at the airport for transit to Mirik. The nearest major airport is Bagdogra Airport (IXB). It is approximately 60 kilometers away and is served by regular Indian Airlines, Air Deccan and Jet Airways. There are flights from Kolkata, Guwahati and Delhi. It is well connected to the rest of India.

Roadways : Mirik is 55 kilometers from National Highway number 31.It is nearly one and half hours journey from Siliguri and are connected to the city by decent road. It’s one an hour and half drive from Siliguri and one and half from Darjeeling. Mirik has road leading to Pashupati in Nepal. The road from Mirik to Darjeeling is used for trekkers to Sandakphu, Phalut etc. The small town of Kurseong is in the beautiful Himalayan valleys of West Bengal located half way between Darjeeling and Siliguri on highway number 55 and it enjoys a milder and a very healthy climate throughout the year. Located at an altitude of 1,458 meters this town has historical significance. There is some of the finest tea estate of India known for quality Orthodox tea. Terraced tea gardens, orchid nurseries, and hill slopes are best explored either on foot or by the Toy Train which runs from New Jalpaiguri to Darjeeling. Kurseong literally means White Orchid. Kurseong was handed over to the East India Company in 1835 by the King of Sikkim. Peace, serenity and the healthy climate of Kurseong that attracted many a great person to this place to name a few like Mark Twain had spent time in 1885. Sister Nivedita the great disciple of Swami Vivekananda made Kurseong her home. Nobel Laureate Rabindra Nath Tagore and the great composer Atul Prasad Sen composed some of their famous works in Kurseong. Fazul Haque, the Prime Minister of undivided Bengal also stayed here. Netaji Subhas Chandra Bose was interned by the colonial Government for a couple of months in 1936 in a house at Giddhapahar near Kurseong town. It is home to some reputed schools such as Goethals, Victoria and Dow Hill. Kurseong is a nature lover's paradise and offers some interesting treks. Two soft treks are Kurseong Town - Forest School - Dow Hill School - Kurseong - 8 kilometers and Kurseong Town - Saint Mary's Hill - (Rangers College) Deorali – Chimney - Kurseong -8 kilometers.

Airways : The nearest major airport is Bagdogra Airport (IXB) is approximately 60 kilometers away and is served by regular Indian Airlines, Air Deccan and Jet Airways. There are flights from Kolkata, Guwahati and Delhi. Vehicles are available in all year round to reach airport.

Railways : Heritage Darjeeling Himalayan Railway has its station at Kurseong. New Jalpaiguri (NJP) is approximately 65 kilometers away and is the nearest major railway station for Kurseong. Kurseong has a narrow gauge Junction. The other railway station nearby is Siliguri nearly 58 kilometers. These Railway Stations have direct railway connection with Kolkata, Delhi, Guwahati, Bangalore, Chennai, etc and other major cities of India. 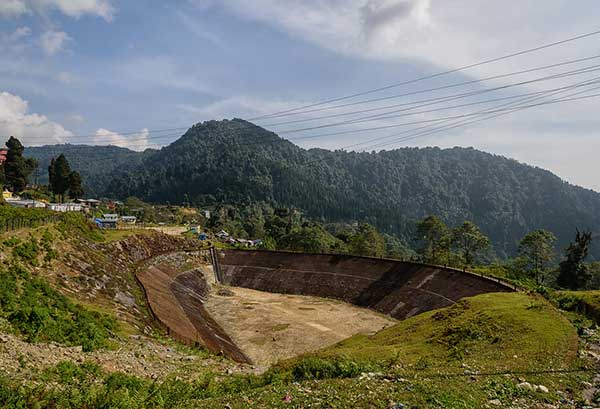 Lava is a small hamlet situated 34 kilometres (21 mi) east of the town of Kalimpong via Algarah in Darjeeling district of the state of West Bengal, India. Lava is situated at an altitude of 7,016 feet (2,138 m). It is one of the few places in West Bengal to receive snow in winter. It is the entry point to the Neora Valley National Park from Kalimpong. The route to Lava is scenic with the change in vegetation from tropical deciduous to the wet alpine trees of fir, pine and birch. The verdant forests are a popular spot for picnicking, trekking and bird-watching. Lava has gradually become a favorite tourist destination. Wild animals such as the Himalayan black bear and barking deer are found in these parts. A Buddhist monastery is present on one of the hills of Lava. Notable sites include Changey Waterfalls and Lava Jamgyong Kongtrul Monastery. 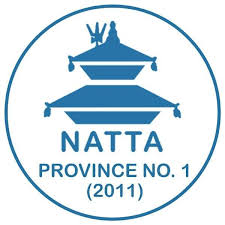 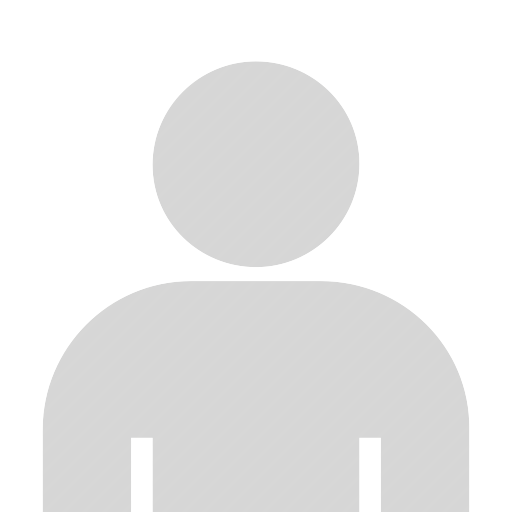 My tour was for 10 days with Magellan Vacation and it was the first tour with them. The quality of rooms, different types of food been served everyday and specifically it is not at all hectic compared to the other companies we tried before.

We enjoyed it thoroughly all the places were covered properly. We loved the food and hotels were good too. We enjoyed the company of our tour manager. Jyoti who was very good. We would definitely travel with Magellan next time.

My husband and I took a trip to Darjeeling and sikkim at the end of April. We couldn't have asked for a better experience! It was more than we could have ever dreamed of, and Magellan made that happen.